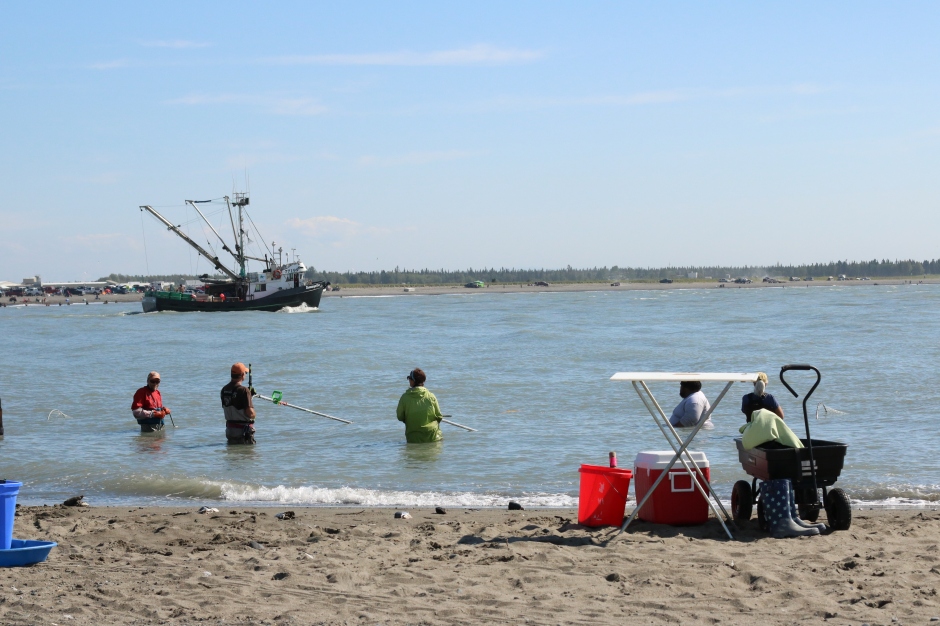 There are some things that only Alaskans will ever understand and one of those things is dipnetting. Every year the Alaska Department of Fish and Game opens up about a 2 week dipnetting season for reds on the Kenai River. Take a look around the office at work and there seems to be a sudden lack of people once ADFG announces the opening of the season. I’ve lived in Alaska for six years and this year was the first time I’ve gotten to experience dipnetting for myself.

Dipnetting was not at all what I expected to say the least. We drove down late Friday night despite the fact I had called in sick that day with a fever that hadn’t subsided.  We set up camp at the Beluga Lookout RV & Campground, which sits on the bluff of the north shore of the Kenai River, at around 11 p.m. Going to bed around 1 a.m. we got a few hours of sleep and quickly gathered up our stuff and drug it down the trail to the beach. Pulling on the waders I made my way into the water with the hundreds of other crazy Alaskans who were there long before the day of fishing opened at 6 a.m.

It wasn’t long before I saw just how serious people were about catching their fish. Five minutes into being in the water some guy yelled at my friend and I for how we were somehow in his way even though we had been there before him. We watched some far braver souls float down the river in wet suits and dry suits with personal floatation devices, poles in hand, and flippers on their feet as they tried to net fish in the swifter waters further from shore and the masses. I watched far crazier people with just t-shirts, shorts, and tennis shoes brave the water for hours with no waders as if they were on a tropical vacation in Hawai’i.

We didn’t catch much that day, but neither did anyone else. The commercial fishermen were out that day and it seemed like the consensus on the beach was that it was all the commercial fishermen’s fault for our bad luck at catching. I ended up with three salmon in the cooler and had brought an additional salmon ashore early in the day, but being the beginner I was, I didn’t pull it far enough ashore before it flopped around and then swam away.  My friend blamed it on the fact I was too dumb to put the net over the salmon once it started to get away, but attempted to pick the slimy thing up with my hands.

We fished late into the evening and at about 7 p.m. me and my best friend called it a day and hauled all of the group’s stuff up the hill as the boys continued fishing. We had 15 salmon that first day and more gear than we could have ever needed in our cart and it was quite the task pulling it through the sand and then up the steep hill to the campground. We were probably lugging up the hill close to 100 pounds it felt like. Some random stranger helped us pull it through the sand, many others just gawked, and one pair of guys with a cart of their own passed us up while we ascended the hill. Jokingly I shouted at them they must not have caught as much fish.

Back at camp Lucy and I prepared the fire and then ate more S’mores than I’m comfortable admitting. We discussed whether Kraft, Nabisco and Hershey’s were in business together and came up with S’mores to sell more of their product as we wondered why the heck anyone in the world would want marshmallows other than for a S’more.

Soon the boys were back and they started filleting the salmon while we tended to the fire and set up everyone’s wet clothes around the fire to dry. At around 11:30 p.m. the rest of our group arrived from Anchorage. We all got to bed pretty late that night, but all agreed we were willing to get up early again the next day.

At 5:15 a.m. the next day when I was woken up I promptly regretted the decision I had made last night to get up early and requested that I sleep in instead still feeling quite sick. Falling back asleep I woke up at around 8:30 a.m. and then made my way to the beach after receiving a text from my best friend that I must bring more coolers down since they were slaying. Sure enough when I made it down there, they had already filled one cooler and were bringing in more. I quickly got in waders and made my way out into the water, but the run appeared to be over. I didn’t spend much time in the water that day and once I caught one fish I called it quits to let the boys fish for the rest of the day. Around 5 p.m. the reds started running again and Lucy and I became designated fish cleaners as the boys brought in fish after fish and we could hardly keep up. When it started to slow again around 7 p.m. we all called it quits for the day and drug our 2 coolers full of fish up the hill (Lucy and I had already lugged up one earlier that day). We prepared dinner and packed up and thus concluded our dipnetting trip that evening.

Dipnetting was definitely an experience of a lifetime getting soaked to the bone standing in the water, being sunburnt to a crisp, not showering for 3 days, and getting covered in fish slime and guts. After this first trip I definitely will be more prepared for next time, but now knowing what it’s like here’s the advice I have for other first timers:

If you have any other suggestions or questions about dipnetting on the Kenai (I’m by no means an expert, it was only my first time after all) feel free to comment.